Parenting is hard, I need help. 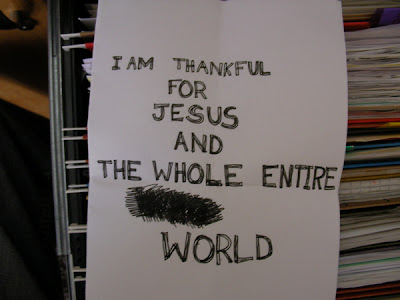 I am trying to think positive. I’m killing time. This sounds weird, and is just about the last last thing I should to be doing right now but, I have the worst tooth ache and I have 2+ hours to wait until I can get into the Emergency dentist (sounds a little sketchy and desperate I know, but my real dentist can’t fit me in and I have reached the point of absolute desperation) Remember the scene in Castaway when Tom Hanks knocks out his own tooth with and ice skate blade? I can see where he is coming from. 800 mg of ibuprofen seems to be taking the edge off.
I type because I can’t concentrate on anything else. And, parenting is hard, I need help. 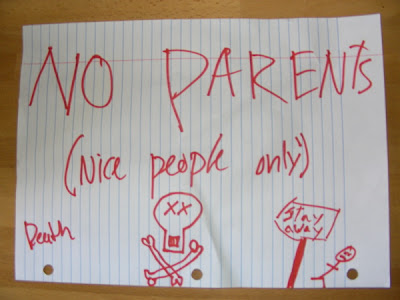 This little note gives you a brief look into how my week has been. This week confirms my theory that it is easier to parent toddlers and babies over pre-teens (in some aspects). This does not mean that I don’t absolutely adore my children and love being a mother-‘cuz I do. It only means that when kids get to a certain age they develop their own ‘agenda’.
You can’t just say, “get into the car we need to go run errands”, because they won’t go- it isn’t part of their ‘agenda’. (they are thinking “what’s in it for me?”) In these cases parenting isn’t so cut and dried. I’m not talking about don’t hit your sister or stay out of the street. I’m talking about issues that don’t have an obvious right or wrong answer. Answers to questions like, “Can I have my own cell phone/ipod/bedroom?…”
How can you do the right thing as a parent when you don’t even know what the right thing is. Do they need all of these things? How can you teach them about needs vs. wants without being the big-bad-mommy.

As you may know- my kids are note writers. Here is just some of the notes we have gotten this week from our oldest, Q. She wants her own room, and I would like her to have it, but it would mean that the toy room would become another bedroom and the toys would be homelessly squatting throughout the rest of the house- something I don’t think I can handle. 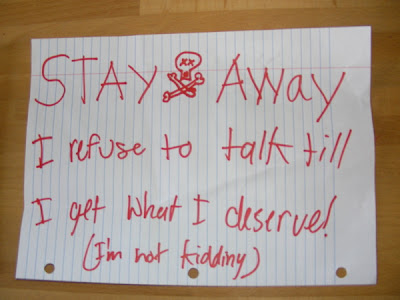 Her clever tactics amaze me. On Monday she turned in a 3 page report called “My Research says…” with some charts and graphs on the hourly usage of the room in question as toy room vs. her bedroom, percentages etc.
We were treated to an oral presentation on Tuesday explaining the research. When we quietly remarked that giving her the toy room probably wouldn’t work she left the room rather abruptly and these notes (and a few others) were posted to her door.
On Wednesday and Thursday she started cleaning up the toy room and making space for her things PROMISING the little ones can still play there (the- I just ignore my parents and do it anyway game plan).
Last night she even slept there. Steve O and I even joked about rustling some leaves outside her window or lightly tapping on the window- a few scare tactics- while it might seem kind of funny- especially in like 10 years- maybe not the most mature way to parent.
So we’ll see how it plays out. When I get my tooth problem fixed or get my hands on some serious drugs to ease my physical suffering then I can likely bear the mental and emotional aspects of my life a little better.