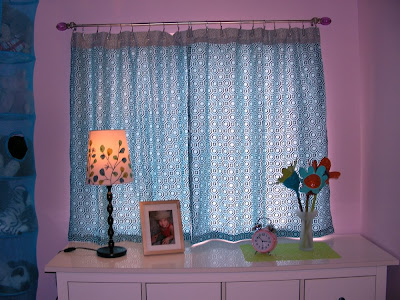 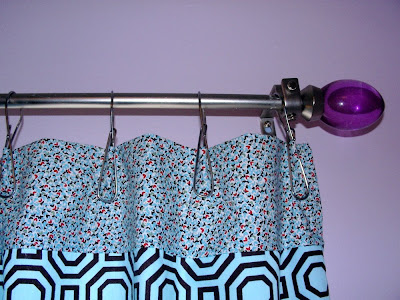 I think my daughters room is finally finished. I even went through all the toys and sorted, organized, and tossed- (not a small job, it hasn’t been done properly in years) I took me the entire morning, but it was way worth it. Now if I could just get my whole house as spotlessly organized as this one room…
The curtains were the finishing touch, I have been waiting for the extra 2 yards I needed to come in the mail- I could only find the Alexander Henry “Hollywood” fabric in blue and brown on ebay. Then… like a dork- I absentmindedly I cut the curtains too short ignoring the #1 rule of woodworking and sewing alike: measure twice- cut once. Luckily, I wasn’t cutting wood- I would have had to start all over; I just had to improvise and patch things up a bit. I think I like the band at the top better than if it were just one solid color.
I found the little clippy holders at Ikea, they look confusing in the package, I thought I was going to have to sew button holes across the top of the curtain to make them work, but you just slide the fabric in and you’re done.
Now, I can move along to the next room. My other daughter’s room (the “I really want my own room”, driving-force-behind-the-upheaval girl) is almost finished too. I’ll get some pics up soon.