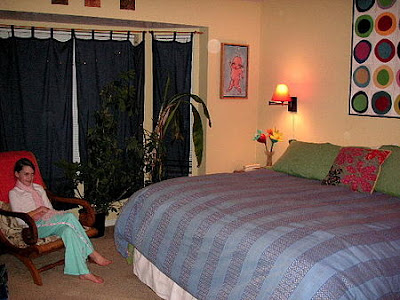 It’s finally bedroom makeover time. For awhile now I’ve had this grandiose plan of a funky headboard, repaint, new wall decor, perhaps a new chair or two. I thought I’d redo it all this summer, but that just didn’t happen. Well, it came to a point one day when I just couldn’t take it any longer. The pillow shams and duvet were showing their years of hard living. They were threadbare, lumpy, shredded and stained. Something snapped and at that shocking moment I realized, “how could I have let myself sink into such embarrassing dishevelment, especially as a seamstress?” 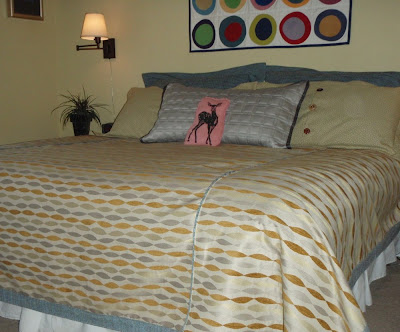 I decided to compromise the grandiose dreams for now and simply settle for some new bedding. Although I did move a few things around on the walls from other places in the house. As you can see I left the quilt on the wall. I still love it after 7 years or something like that… someday I’ll change it out for another quilt or some pictures- but for now it stays. The “squash blossom” walls look a little washed with this coverlet- at least for my taste, but like I said- it’ll do for now. 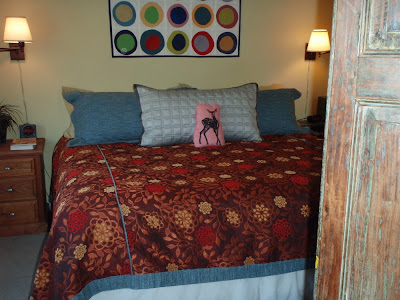 Wow, what a difference a few yards of fabric can make to a room and my psyche. I almost took the super easy way out and purchased the bedding pre-made, but who am I kidding- I love to sew and that route would have been way too boring.
To be completely honest, I hate matchy-match bedding where all the fabric is the same from head to toe and beyond. I’d much rather mix and match pieces myself.
To fancy things up I added a narrow strip of the blue fabric to the side seams that were unavoidable because of the fabric width. I could have put in some welting to add a round shape the strip. But I didn’t have enough welting on hand and I didn’t want to go back to the store- I think I like the flat look better. It might even wear better flat. 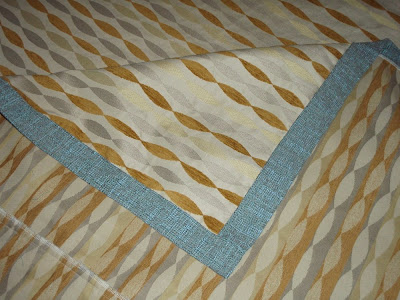 I was thinking about a duvet with different fabric on either side but the fabric I finally picked was rather thick and it would have been way too heavy, a pain to take completely off every night and switch out for my beloved down comforter ( I can’t quit you) and way too heavy with the down comforter inside (can you say- suffocation?).
So, I made 2 one-sided coverlets that just lay on top of the down comforter, I finished the edges of both with the blue fabric from the pillows to tie it all together (ohh, too matchy-match maybe?). I found some gigantic wacky buttons at Confetti Antiques to jazz up the lighter colored, geometric patterned pillow shams. One coverlet looks summer/springish with lighter colors and the other looks rather fall/wintery. 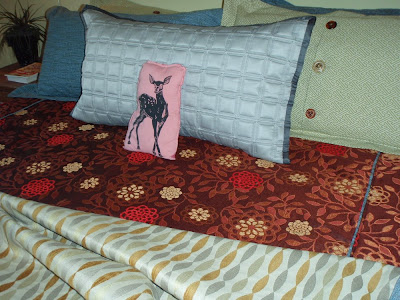 I must admit, I did find the one silvery pillow at TJ Maxx. I fell in love with the quilty squares and the metallic sheen, and had to have it. The room looks so much better and cozier. I feel like a grown-up now.