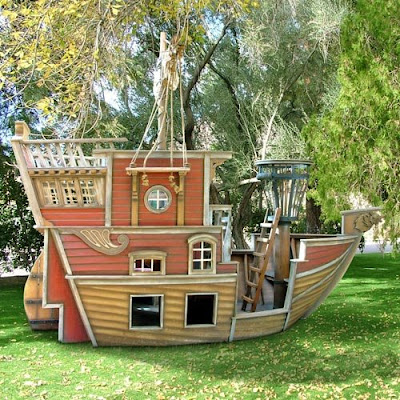 I ran across a Posh Tots catalog from a year or so back right about the time I read the article below. Go ahead and read for yourself- but I’m seeing some correlation. I’m pretty sure the guy pictured below, and people described in the article had this playhouse (only $52,000). 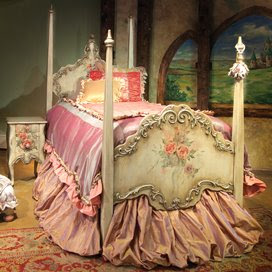 This bed is also from Posh Tots, which I thought might be out of business due to the recession troubles we’ve dragged the entire planet into- but the website up and running and full of treasures like the bed pictured above (only $4,200). Gather the kids around the computer, take a peek and prepare to be amazed. The Sears catalogue of the Narcissistic generation? 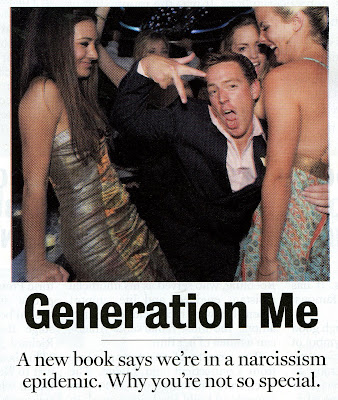 Growing up, my literary heroines were those who, like me, struggled to be good: Jo from “Little Women,” Harriet the spy, Laura Ingalls and Pippi Longstocking. A strong-willed (and loud) child, I craved examples of unruly knuckleheads tethered to a loving family that encouraged us to be our best selves despite our natural inclinations. Precocious but naive, I thought of myself as an ugly duckling—misunderstood in my youth but destined for a beauty and stature completely impossible for my loved ones to comprehend. I shudder to think what a monster I would have become in the modern child-rearing era. Gorged on a diet of grade inflation, constant praise and materialistic entitlement, I probably would have succumbed to a life of heedless self- indulgence.

Perhaps, one day, we will say that the recession saved us from a parenting ethos that churns out ego-addled spoiled brats. And though it is too soon to tell if our economic free fall will cure America of its sense of economic privilege, it has made it much harder to get the money together to give our kids six-figure sweet-16 parties and plastic surgery for graduation presents, all in the name of “self esteem.” And that’s a good thing, because as Jean Twenge and W. Keith Campbell point out in their excellent book “The Narcissism Epidemic,” released last week, we’ve built up the confidence of our kids, but in that process, we’ve created a generation of hot-house flowers puffed with a disproportionate sense of self-worth (the definition of narcissism) and without the resiliency skills they need when Mommy and Daddy can’t fix something.

Indeed, when Twenge addressed students at Southern Connecticut State University a couple weeks back, their generation’s narcissism was taken as a given by her audience. The fact that nearly 10 percent of 20-somethings have already experienced symptoms of narcissistic personality disorder, compared with just over 3 percent of the 65-and-over set? Not surprising. That 30 percent of college students agree with the statement: “If I show up to every class, I deserve at least a B”? Didn’t get much of a rise either. When they’re faced with the straight-out question—do you agree with this research, that you guys are the most narcissistic generation ever—there are uniform head nods and knowing grins to each other. “At the end of the day I love me and I don’t think that’s wrong,” says Sharise Tucker, a 21-year-old senior at Southern Connecticut State, a self-professed narcissist. “I don’t think it’s a problem, having most people love themselves. I love me.”

But as Twenge goes on to illustrate, all that narcissism is a problem that can range from the discourteous—residential advisers at Southern lament students disregarding curfews, playing dance music until 3 a.m., demanding new room assignments at a moment’s notice and failing to understand why professors won’t let them make up an exam they were too hung over to take—to the disastrous—failed marriages, abusive working environments and billion-dollar Ponzi schemes. Seems that the flip side of all that confidence isn’t prodigious success but antisocial behavior.

Armed with a steady influx of trophies just for showing up, “I Am Special” coloring books and princess parties, it is hard for kids to understand why an abundance of ego might be bad for them. Hot off their own rebellions in the late ’60s, my parents struggled to give me the freedom to be me while also teaching me generosity, compassion and humility. I didn’t make it easy on them. I was the kind of kid who threatened to drink Drano if asked to load the dishwasher. “Don’t get cocky, kid,” was the response from my dad when I declared my grades too good for my behavior to be monitored. “Pretty girls are a dime a dozen,” my mother would remind me when I came up with the brilliant idea that school was getting in the way of my social life. My mom would also trot out fables to keep me in check. Ever read the original ending to Cinderella? The evil stepsisters get their eyes plucked out by pigeons and end up beggars. But it worked, mostly, and “Don’t believe your own bulls––t” became my mantra. Of course, I still hate to be told what to do, dislike following rules and will waste hours trying to get out of the simplest household task; but hey, I’m a work in progress.

But no matter how you were raised, the handiest cure for narcissism used to be life. Whether through fate, circumstances or moral imperative, our culture kept hubris in check. Now, we encourage it. Pastors preach of a Jesus that wants us to be rich. The famously egocentric wide receiver Terrell Owens declares at a press conference that being labeled selfish is fine with him. Donald Trump names everything he owns after himself and calls his detractors “losers.” We live in a world where everyone can be a star—if only on YouTube. The general sense among students on that New Haven campus is that with the world being such a competitive, cutthroat place, they have to be narcissists. Well, you may need a supersize ego to win “America’s Next Top Model” or to justify your multimillion dollar bonus. But last I checked, most of our lives don’t require all that attitude. Treating the whole world as if it works for you doesn’t suggest you’re special, it means you’re an ass. As an antidote to a skyrocketing self-worth, Twenge recommends humility, evaluating yourself more accurately, mindfulness and putting others first. Such values may seem quaint, maybe even self-defeating, to those of us who think we’re special, but trust me: it gets easier with practice.