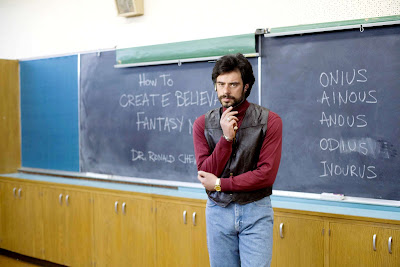 I finally saw Gentleman Broncos, an here is how it went- the first time I smiled frequently, lol here and there and generally enjoyed the extreme wackiness, the perfect movie for 10 year old boys and anyone else who find poo-poo pee-pee, throw-up then make out jokes hilarious (I guess that’s me).
The second time (and I’ve only seen it twice so far) around much funnier, I laughed out loud the whole way through. I’m thinking this movie is only getting funnier the more you watch. I feel same way about Napoleon Dynamite.
Here’s the deal- you have to buy the movie, not rent it. This is because the Extras aren’t on the rental version- and the Behind-the-Scenes Extras are an integral part of the entertainment.

By far, my favorite part of the entire DVD is the part in the Behind-the-Scenes when the Behind-the-Scenes camera isn’t on the action, it’s on Jared Hess, the director, and all of the crew sitting around him. They are listening to character Judith Purvis tell her son Benjamin about her new line of lingerie ‘Decent Beginnings’. The design names include, “…church organ…drowned butterfly…simply cinnamon…righteous do…” as the names are read off by the actors Jared and crew start cracking up, barely containing their giggles until someone yells “cut” and they erupt in laughter. Tears in my eyes funny.

what I love this week