Knolling in the New Year 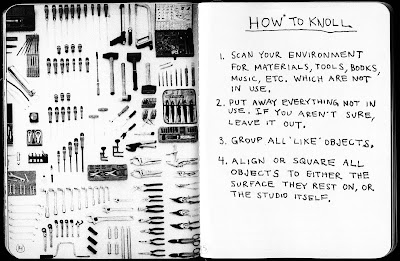 As we all look fresh-faced into 2013, make extreme resolutions and set challenging goals, I believe ‘knolling frequently if not constantly’ deserves a place somewhere on that list.  It’s a newish sort of word, used (and I think coined) by Tom Sachs in ‘Working to Code’ (a quirky and eccentric movie series designed for his employees and studio visitors.)

Knolling is the process of arranging like objects in parallel or 90 degree angles as a method of organization.

If you’re feeling a hankering to knoll, try it out a time or two, here are a few project ideas…

Take apart an old telephone (then put it back together).

And thanks to Instagram,  a perpetually flowing source of knolling inspiration is available.

@brettrhoades, a well knolled kitchen- (reminds me just a little of the movie Sleeping With The Enemy.)

@mynameiscolton, my favorite combination of goods- a well rounded man, I presume.

@gusbaganz, looks like he’s heading out for a good time, but nothing too serious.

Want to give it a try and show the world? Post your knolled picture on Instagram with the hashtag (#knolling or #alwaysbeknolling) and drop a @noelleodesigns in there- I want to see!